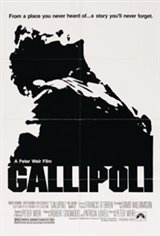 The first of two consecutive films to see director Peter Weir team with Mel Gibson (the other being The Year of Living Dangerously), Gallipoli follows two idealistic young friends, Frank (Gibson) and Archy (Mark Lee), who join the Australian army during World War I and fight the doomed Battle of Gallipoli in Turkey.

The first half of the film documents the lives of the young men in Australia, detailing their personalities and beliefs. The second half of the movie chronicles the ill-fated and ill-planned battle, where the Australian and New Zealand Army Corps is hopelessly outmatched by the enemy forces. Gallipoli was the recipient of eight prizes at the 1981 Australian Film Institute Awards.