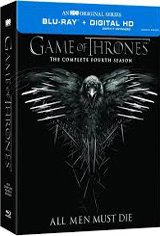 While the Lannisters' hold on the Iron Throne remains intact, new and ongoing threats from the south, north and east threaten to tip the scales. As Stannis Baratheon and Daenerys Targaryen continue to grow their respective armies, the arrival of the Lannister-loathing “Red Viper of Dorne” poses a more immediate danger.

In the north, the depleted Night’s Watch seems overmatched against the advances of Mance Rayder’s army of wildlings, which in turn is being trailed by an even more formidable foe: the undead White Walkers.

Based on George R.R. Martin’s bestselling book series A Song of Ice and Fire.

• Behind the Battle for the Wall – Follow the cast and crew as they create the most ambitious battle to date. This 30-minute documentary explores the challenges of putting together one of the series’ most intense episodes, with never-before-seen material.
• The Fallen: A Roundtable – Writer Bryan Cogman sits down with a few of the many cast members who meet their demise in Season 4. From first learning of their deaths to shooting their final scenes, this 30-minute feature will shed light on what it’s like to live—and die—in the Game of Thrones world.
• The Politics of Power: A Look Back at Season 3 – Revisit the brutal events of Season 3 to see power shifts that define Westeros at the start of Season 4.
• Bastards of Westeros – Hear showrunners David Benioff & D.B. Weiss and author George R.R. Martin discuss the role bastards play in the Seven Kingdoms. • Deleted/Extended Scenes – Two deleted scenes.
• Audio Commentaries – Commentaries with cast and crew including showrunners David Benioff and D.B. Weiss, A Song of Ice and Fire author George R.R. Martin, Sophie Turner, Maisie Williams, Pedro Pascal, Aiden Gillen and more.