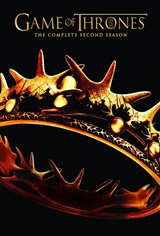 Season Two picks off where the first season tragically ended: Ned Stark’s wrongful beheading and a full-fledged war between the Starks and Lannisters.

Tyrion Lannister is named Hand of the King, to Queen Cersei’s dismay. News of King Joffrey’s illegitimate rule on the throne also starts to circulate, which only sparks more animosity and tension.

Robb Stark is at the forefront of the Stark army, and he’s not backing down. In order to secure alliances, Ned’s widow Catelyn travels to King Renly’s camp to negotiate, but he is mysteriously killed by dark magical forces, which escalates the growing tensions.

In an ironic twist, Theon Greyjoy betrays his alliance with the Starks and attempts to take over Winterfell, which results in a failed attempt and an unfortunate fate for Theon.

Sansa and Arya Stark are now captives in King’s Landing, and their mother Catelyn makes secret arrangements to secure their freedom. While Sansa’s marriage to King Joffrey becomes more and more unlikely, Arya is taken away from King’s Landing and meets important people on her journey.

As the war starts to infiltrate Westeros, other strong forces enter the picture: Stannis Baratheon, who believes he holds the rights to the Iron Throne. Meanwhile in Essos, Daenerys starts to make her way back to Westeros, and her loyal dragons have made her a force to be reckoned with. Jon Snow remains with the Night’s Watch north of the Wall, and his journey alongside the other men reveals hidden secrets and dark forces all around them.