George of the Jungle 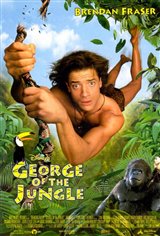 Jay Ward's fondly-remembered cartoon series about a klutzy king of the jungle gets the big-screen, live-action treatment in this comedy from Walt Disney Pictures. A young boy named George becomes lost in the jungles of the African nation of Bukuvu following a plane crash, where he's rescued and raised to manhood by an articulate ape called Ape (voice of John Cleese).

George grows to become a strapping adult (played by Brendan Fraser) who is cheerful and good-hearted but not terribly bright, not to mention his nasty habit of running into trees while swinging on vines from one part of the jungle to another.

Ursula Stanhope (Leslie Mann), an heiress from San Francisco, travels to Bukuvu for a safari, both to satisfy her thirst for adventure and because she's trying to get away from the snooty Lyle Van Der Groot (Thomas Haden Church), whom she is engaged to marry even though she doesn't like him very much.

Lyle follows Ursula to Bukuvu, hoping to catch up with her and locate the legendary White Ape of the Jungle; when Ursula becomes stranded and is rescued by George, Lyle is determined to rescue her from the savage ape man, even though George is a greater threat to himself than anyone else.

George finds himself infatuated with the lovely Ursula, and he hopes to win her heart, even though he's a bit rusty on the particulars of the human courtship ritual (Ape tries to help by lending him a copy of Coffee, Tea, or Me?). We also get to meet George's faithful pet Shep, an elephant who seems to have gotten the idea that he's a Cocker Spaniel.