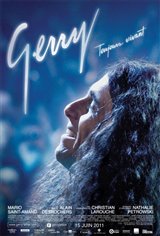 Born in 1946 in Saint-Jean-sur-Richelieu, Gerald "Gerry" Boulet renounced the seminary to the chagrin of his pious mother, to become a musician instead. In the 1960s, along with his older brother Denis, Johnny Gravel and Jean Michel Lamothe, he forms the group Les Gants blancs. Gerry falls in love with a woman named Denise, and they have a son together. In the early 1970s, along with singer/organist Pierre Harel, they rename the group Offenbach and perform mostly blues-rock songs in French. Despite Offenbach's critical success, in 1972 Denis leaves the band. During a two-year tour of Europe, the band members are invited to director Claude Faraldo’s mansion, who tells them he wants to make a documentary about them. While there, Gerry falls in love with Claude's sister Françoise and decides to leave Denise and their son. Back in Quebec, Offenbach has as many triumphs as failures and dissolves in the mid-1980s.