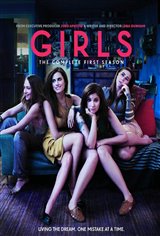 Hannah is a struggling 20-something in the middle of a crisis: her parents tell her they’re cutting her off and encourage her to turn her unpaid internship into a job, which fails miserably. Her circle of friends isn’t having any better luck either. Marnie and her boyfriend are at a crossroads after she reveals she’s just not that into him anymore. Jessa’s traveling spree ends with her back in New York City with serious baggage: cousin Shoshana and an unplanned pregnancy (which later turns out to be a false alarm).

Hannah’s involved in a sexual relationship with the odd Adam, and their relationship is tested in the first season. Shoshanna struggles with her innocence, which she finds problematic, and she gets involved in some dangerous fun. Jessa’s bohemian lifestyle throws her into the path of a father, and season one ends with a quickie wedding and many undetermined fates.