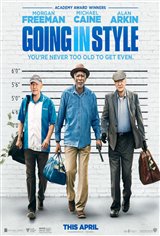 Three retired men and lifelong pals (Michael Caine, Morgan Freeman, Alan Arkin) lose their pensions when the company they've worked for their entire lives is sold to a foreign corporation.

Angry, and in need of money to survive, they decide to get literally get their payback by robbing the same bank that's withholding their hard-earned money. The elderly band of robbers risk it all, and it turns out that being a burglar in this day and age is not as easy as it looks. Hilarious hijinks ensue, and soon enough, the trio have an FBI agent (Matt Dillon) hot on their heels.