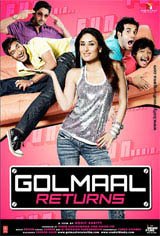 Gopal (Ajay Devgan), who lives with his wife Ekta (Kareena Kapoor), sister Esha (Amrita Arora) and a dumb brother-in-law Lucky (Tusshar Kapoor), gets stuck in a yacht one night after he saves an attractive young woman Meera (Celina Jaitley) from the dreaded goons, while on his way back home from office. Due to the circumstances, both of them stay back on the yacht.

When he arrives home the next day, his over suspicious wife Ekta, a hard core saas-bahu serial's fan, suspects him of flirting around with his girl staffs. Gopal thinks that it's difficult to convince her by telling her about the incident that actually took place the prior night and hence, he invents a story about spending the night with a fictitious friend named Anthony Gonsalves. Ekta does not believe his story as she knows that he never had a friend by that name, and hence, she decides to write to Anthony to come and visit her.

Gopal then convinces one of his juniors, Laxman (Shreyas Talpade), to pretend like Anthony, and thus convince Ekta that he was indeed telling the truth. Laxman agrees to do so, and everything goes according to plan until the address on which Ekta had written a letter to Anthony turns out to be real. Meanwhile, Gopal finds out that a dead body was found at the same location where he saved Meera from the goons. The Investigating Officer Madhav (Arshad Warsi), who also happens to be Esha's boyfriend, does not get along well with Gopal. He finds out that Gopal was missing from his home that very night and that the dead person was an employee from his company.