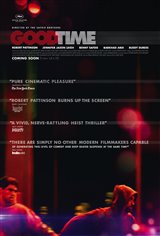 After a robbery gone awry, two men are left running from the law – but when one, Nick (Benny Safdie), gets caught and is put in prison, his brother, Constantine (Robert Pattinson), vows to find out what happened and bail him out of jail. This puts Constantine on a desperate and dangerous one-night journey to find his brother and bring him home, while also trying to evade the law himself and save both their lives.