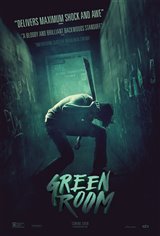 While on the road in Oregon, a down-on-their-luck punk band (Anton Yelchin, Alia Shawkat, Callum Turner, Joe Cole) agrees to perform a last-minute gig in order to make enough money to buy gas to get home to Virginia. The booker advises them not to "talk politics" — which seems easy enough, until they take the stage facing an audience of neo-Nazi skinheads.

They start the set with a cover of the Dead Kennedys' "Nazi Punks F*** Off" and although their performance seems to go surprisingly well, when they return backstage, they find something incredibly gruesome and are confronted by the club owner and some white supremacists.