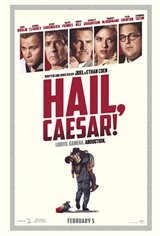 In the 1950s, Capitol Pictures Studios is working hard to bring to the screen their biggest release of the year — Hail, Caesar — starring Baird Whitlock (George Clooney), one of the biggest stars in the world.

When Baird Whitlock goes missing, studio "fixer" Eddie (Josh Brolin) is brought in to find him. A ransom note is delivered, asking for $100,000 for Whitlock's safe return. It's signed: The Future.