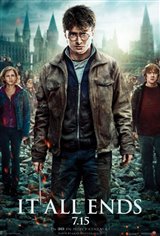 Harry (Daniel Radcliffe), Ron (Rupert Grint) and Hermione (Emma Watson) learn that a Horcrux that holds a piece of Lord Voldemort's soul has been hidden at Hogwarts, so they sneak into the school, which is heavily guarded by the Dark Lord's forces, to recover it.

While there, Harry views the memories of Severus Snape and finds out something surprising about his former teacher. Harry is called upon to make the ultimate sacrifice as he draws closer to a final showdown with Lord Voldemort.