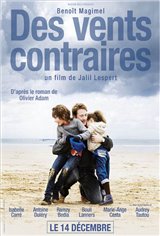 One year after his wife Sarah's mysterious disappearance, writer Paul Anderen takes his two children to settle in his birthplace, Saint-Malo, which he hasn't visited for many years. His brother Alex welcomes him warmly and gets him a job at his driving school, founded by their late father. Haunted by the memory of his last moments with Sarah, marked by an argument that seemed like an ultimatum, Paul cannot find inspiration to write. In addition, he struggles to connect with his son and his preteen daughter, who still hope for their mother's return. The novelist, however, finds an ally in a local policewoman, who informs him of the latest developments in the investigation. But her sympathy for Paul falters when she learns he once helped a divorced father kidnap his son.