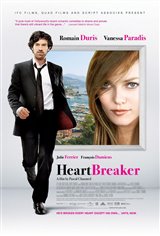 HEARTBREAKER is an action-packed romantic comedy pairing two of France's biggest young stars: Romain Duris (THE BEAT THAT MY HEART SKIPPED, PARIS) and actress/singer Vanessa Paradis (GIRL ON THE BRIDGE). A smash hit in France, the film was also featured at the Tribeca Film Festival.

Charming, funny and effortlessly cool, Alex (Romain Duris) is a professional heartbreaker who for a fee can turn any husband, fiance or boyfriend into an ex. Alex has one ironclad rule: He only breaks up couples where the woman is unhappy. His latest job will put that rule to the test. The target is Juliette, a beautiful heiress who is set to marry the man of her dreams. With ten days until the wedding, Alex has been hired by her father to carry out his most daring seduction yet that risks him being caught by his ruthless personal creditors, angry exes, and the beautiful and independent Juliette herself. But worst of all, will he discover to his own cost that when it comes to love, the perfect plan doesn't exist?

This fall, no one will be able to resist HEARTBREAKER.