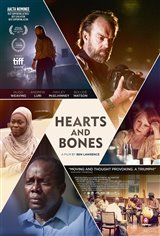 Daniel Fisher returns home, and despite his partner's protests, prepares for his next dangerous overseas assignment. At the same time, he is preparing for an upcoming retrospective exhibition of his work from the world's war zones. South Sudanese refugee Sebastian Aman has built a life in Australia, living happily with his wife and young child. When he learns that Daniel's exhibition may display photographs of a massacre in Sebastian's village 15 years earlier, he finds Daniel and appeals to him to exclude those photographs. An unlikely friendship develops between the two men, but it is severely tested when Daniel makes a shocking discovery.