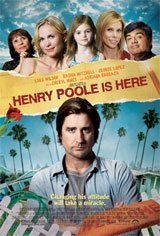 A disillusioned man (Luke Wilson) goes into hiding in placid suburbia only to discover he cannot escape the forces of hope.

His life turned upside down by circumstances beyond his control, Henry Poole (Luke Wilson) returns to the middle class neighborhood where he grew up, hoping to find some peace and solitude. But Henry's solo retreat is disrupted by a trio of female neighbors: a well-meaning busybody named Esperenza (Adriana Barraza), who drops by with a plate of homemade tamales and a whole lot of questions; solemn eight-year-old Millie (Morgan Lily), who hasn't spoken a word in the years since her parent's break-up, but who surreptitiously records neighborhood chatter and plays it back—often at the most inopportune moments—and her mother, Dawn (Radha Mitchell), the beautiful young divorcee next door who sparks unexpected tenderness in Henry.

When Esperenza discovers a stain on Henry's stucco wall that appears to have miraculous powers, the irrepressible optimist begins leading pilgrimages to the "holy site" and invites church officials, including her pastor, Father Salazar (George Lopez), to inspect the apparition. Inspired by her convictions, the faithful who gather there begin to report inexplicable events, which they attribute to the wondrous powers of the wall.

As the miracle-seeking crowd in his backyard grows and his silent friendship with Millie brings him closer to Dawn, a skeptical Henry is irresistibly drawn back into the world he has tried to leave behind. Gradually he begins to observe the miracle of hope, and then experiences its healing powers first hand.