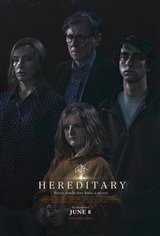 Following the death of her mother and family patriarch, Annie Graham (Toni Collette) attempts to quell her grief and continue on with her life. She starts to notice strange occurrences following her family, mostly concentrated on her 13-year old daughter Charlie (Milly Shapiro), who Annie says was her mother’s favorite.

Charlie is a brooding and deeply disturbed teenager whose behavior begins to concern her family, including father Steve (Gabriel Byrne) and brother Peter (Alex Wolff). Paranormal forces plaguing the family begin to worsen, focusing much of their attacks on Peter. As ancestral secrets about the family begin to emerge, Annie must attempt to uncover the truth and overcome the spirits that threaten their safety.