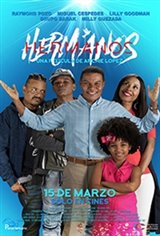 Two twin brothers are separated at birth. Growing up in very different environments, one becomes a devout Christian and the other a vulgar petty thief. Their lives are crossed when the Brother Thief tries to rob the Christian Brother who, product of an accidental aggression, is in a coma.

Noticing the enormous resemblance between the two, Brother Thief decides to usurp and steal the Christian Brother's identity, even moving with his brother's family, which assumes that he has temporary amnesia. How long can you deceive and deceive yourself?