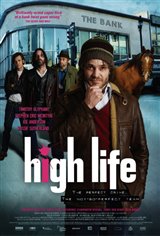 High Life is a comedic heist story from the flip-side of the '80s consumer dream.

It's 1983 and Dick and his pals have been botching jobs and racking up prison time for years, but this time Dick has the perfect plan for the perfect heist and enough dough to buy he and his posse some "self-respect." With the arrival of his slightly unhinged cell-mate, Bug, on the scene it's going to take all Dick has just to keep his crew from killing each other, let alone pulling off the heist.

Ripe with humor and manic, high-wire tension, High Life's lovable losers will stop at nothing as they bungle their way through their pipe dream of easy money and easy street.