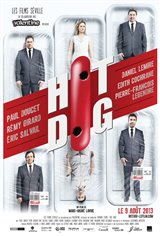 Philip, one of the partners of a sausage company named Saucibec, is wrongly convinced that his partners are going to fire him. He decides to sabotage the company by putting one of his teeth into the sausage mix. Philip finds out that it was actually another partner, Gilles, who was fired, but it’s too late. An unemployed man named François and his girlfriend discover the infamous tooth in a package of sausages they bought and think they’ve hit the jackpot, leading to a series of misunderstandings that weave together the lives of Philip, François, and a mob boss named Massimo.