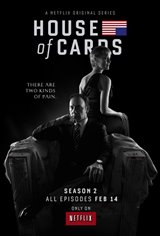 After being appointed Vice President of the United States, Frank Underwood starts to cut all ties that connected him to the murder of Congressman Peter Russo. Frank also finds himself dealing with both domestic and international problems. As problems begin to arise with his new administration, Frank comes to realize that he is in a position to surmount them and gain more power. He then be begins to maneuver his pawns into play.