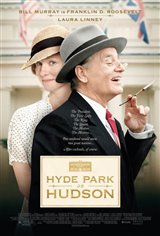 In June 1939, King George VI and his wife, the Queen Consort Elizabeth, spent a weekend at the home of President Franklin D. Roosevelt (Bill Murray) and his wife Eleanor (Olivia Williams) in upstate New York. The visit, which was the first time a reigning British monarch had ever visited the U.S., was supposed to help bolster American support for the U.K. on the brink of the Second World War.

But political affairs aren't the only matters being stirred up as Roosevelt must also deal with his flourishing relationship with Margaret "Daisy" Suckley (Laura Linney), his distant cousin. It's only a matter of time before their affinity turns into a full-fledged love affair behind closed doors.

The film is based on Suckley's private journals and diaries, which were discovered after her death in 1991.