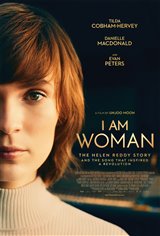 Australian Helen Reddy (Tilda Cobham-Hervey) decides that in order to make it as a singer, she has to move to America. When she discovers she's being paid less than the members of the band, she's told that they're men, and they have families to feed.

Despite being told that groups are all the rage, she climbs the ladder to success in 1971 when she lands a record deal. Tired of women being treated like objects with no rights, she writes the lyrics to the song "I Am Woman." However, the male executives at the record company balk, calling it "man-hating."

Helen stands by the song, saying it means something to her. It appears on her debut album and sells over one million copies as a single. "I Am Woman" becomes the anthem of the Women's Liberation Movement and Helen goes on to have nine Number One U.S. Singles and sells over 25 million albums.