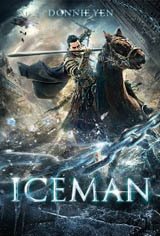 Four orphans living during the Ming Dynasty in China are raised together as martial artists, becoming elite imperial guards. When one of the orphans, Ying, is granted a special honor, the other three betray him, marking him a traitor to China and its Emperor.

When the four confront each other, an avalanche falls on them, leaving them frozen in the snow for 400 years until they are unearthed and reanimated. Ying must adapt to modern times in order to redeem his name and take revenge.