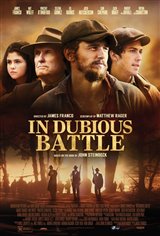 James Franco directs and stars in this drama based on the novel by Pulitzer Prize-winning author John Steinbeck. In the California apple country, 900 migratory workers are paid a fraction of the wages they were promised. Led by activist Jim Nolan (Nat Wolff), they rise up against the landowners, and organize a major strike to unionize exploited apple pickers in the 1930s.