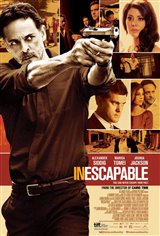 Adib Abdel Kareem (Alexander Siddig) did the impossible. He escaped Syria before the Arab Spring began to take hold, and built himself the perfect life in Toronto. With a wife and two grown daughters, no one would have suspected that he came from such a haunted past. But his new life did not come without consequences, as Adib had to leave the love of his life, Fatima (Marisa Tomei), behind.

When his eldest daughter, Muna, suddenly disappears in Damascus, he knows he is the only one who can save her, forcing him to return to his homeland again. Once in Syria, he enlists the help of Fatima and a Canadian Consular official (Joshua Jackson). Although he seems helpful at first, the man turns out to know more about the situation than he initially lets on.

With the odds stacked against him, Adib must now face his sordid past as a young military policeman—putting everything on the line, he risks his life for the sole purpose of trying to save his daughter's.