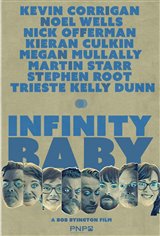 While playing around with stem cell research, a pharmaceutical company botched a batch of infants, giving them a gene capable of keeping them from aging beyond the stage of infancy. The resulting company, Infinity Baby™, which is run by a man named Neo (Nick Offerman), now works to provide nurturing parents with their very own forever baby.

Ben (Kieran Culkin) and his buddies Larry (Kevin Corrigan) and Malcolm (Martin Starr) are hired to market the company's services to consumers, but while Ben is stuck in his own personal relationship limbo, Larry and Malcolm get acquainted with one of the ageless babies.