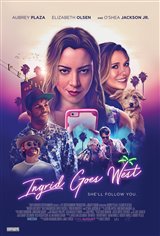 Ingrid Thorburn (Aubrey Plaza) is obsessed with social media and the people who attract huge amounts of followers. The problem? She has a hard time differentiating between reality and publicity — she actually thinks she has friendships with the people she's following.

After a sting in a psychiatric hospital, Ingrid discovers she's inherited $60,000 from her recently deceased mother. Ingrid moves to California. She's been following a social media star named Taylor Sloane (Elizabeth Olsen), who seems to have the perfect life in Venice. In order to meet Taylor in person, Ingrid kidnaps her dog, and the ploy works. That is, until Taylor’s brother Nicky (Billy Magnussen) shows up.