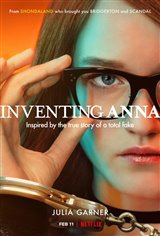 Journalist Vivian Kent (Anna Chlumsky) is intrigued by the story of Anna Delvey (Julia Garner), who convinced New York’s elite she was a German heiress. When Anna is arrested for stealing money from people, banks and hotels, Vivian convinces her editors to let her pursue the story, and visits Anna in prison to get her side of the story.

However, there's a time limit on how long she can research, not only set by her editors, but because she's going to have a baby. When Anna isn't very forthcoming, Vivian searches out the people she's seen with on her Instagram, and gets very different stories of who and what Anna actually is.