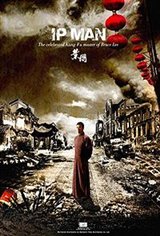 Wing Chun grandmaster Ip has an amazing wife, plenty of money, the most beautiful house in town, and a blossoming martial arts academy. But when the Japanese occupy his hometown of Foshan during the Sino-Japan war (1937), Ip, like the rest of the locals, is forced into hard labor and brutal sparring matches for the enemy's amusement.

His incredible skills catch the eye of the Japanese Colonel, Mr. Miura, who wants Ip to teach Wing Chun to his soldiers. When Ip refuses, he faces the most intense challenge to both his training and his honor.