I've Loved You So Long 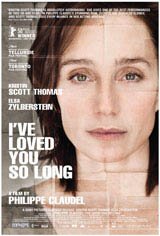 Léa (Elsa Zylberstein) and Juliette (Kristin Scott Thomas) are sisters. The film begins with Léa, the younger sister by fifteen years, picking Juliette up at the airport. We soon realize that the two sisters are almost complete strangers to each other. Juliette has just been released from prison after serving a long sentence. Léa was still a teenager when Juliette, a doctor, was convicted of the murder of her six-year-old son. Léa contacted Juliette when she was released and suggested that Juliette come to live with her. Juliette had no particular desire to see her sister again.

Luc (Serge Hazanavicius), Léa's husband, is quite reserved, almost hostile, about Juliette's presence under their roof. Luc and Léa have two adopted Vietnamese daughters, who are 8 and 3 years old. Luc's father, Papy Paul (Jean-Claude Arnaud) also lives in the house. He's a charming old man who spends all of his time reading since a stroke deprived him of the power of speech.

Life together isn't easy to begin with. Juliette has to relearn certain basics. The world has moved on and she often seems confused. Although she may seem cold and distant, her attitude stems more from her being ill at ease. Helped by some, such as the kindly but tactless social worker and her open-hearted but depressed parole officer (Frédéric Pierrot) whose confidante she becomes, Juliette is also rejected by others, particularly employers who throw her out as soon as they find out what she did.

Léa's attitude is ambiguous. She avoids talking about Juliette's terrible crime and time in prison at all costs. She wants nothing to blunt the happiness of their reunion and getting to know each other again. Luc mentions it reproachfully, as does Juliette in a different way.

Gradually, the real Juliette emerges. She opens up to the world once more, thanks to her two nieces, with whom she becomes very close after being very stiff with them at the beginning, and Michel (Laurent Grevill), a friend of Léa's, and Papy Paul, who, in a more symbolic way, knows what it's like to be locked away. Juliette gets a job as a medical secretary at the local hospital on the condition that she never mentions she used to be a doctor. Her relationship with Léa becomes much stronger and more intimate. Even Luc succeeds in pushing his preconceptions to one side and seeing Juliette as his sister-in-law, not as a murderer.

But a huge questions hangs over Juliette's renaissance. Why did she do such a terrible thing fifteen years ago? For all the others, it's a recurrent thought that they dare not put into words. And for Juliette, locked away in her secret, it's a burden to bear, which holds her back from engaging in her life and believing that she too has the right to be happy.