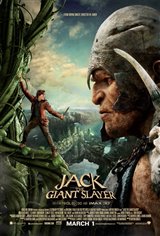 When young farmer Jack (Nicholas Hoult) accidentally opens the long sealed gateway to the world of giants, he unwittingly also restarts an ancient war between the giants and humans.

Thought only to have been characters of legends, the giants attempt to reclaim the land they lost centuries ago. Jack must join the fight to save not only the lives of the people of the kingdom, but also the life of the princess whom the giants have kidnapped.