James vs. His Future Self 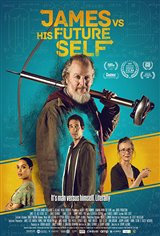 James (Jonas Chernick), a brilliant and obsessed particle physicist, is on the brink of inventing time travel. However, as he works nonstop on his obsession, he has neglected the only two people who care about him: his best friend and crush Courtney (Cleopatra Coleman), and his sister Meredith (Tommie-Amber Pirie).

Jimmy (Daniel Stern), the future, time-travelling version of James, returns to the present time. Angry, cynical and driven by regret and loss, he wants to right the wrongs of his life. He tries to convince his younger self to give up on time travel and stop and smell the roses. Or else.