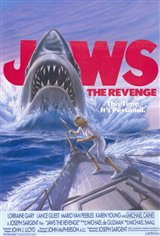 This third sequel to the 1975 mega-hit Jaws returns Lorraine Gary to the role of Ellen Brody, widow of the Roy Scheider character from the first two films. When her son Sean, the current police chief of shark-plagued Amity Island, is killed by the beast, Ellen goes to the Bahamas to comfort her surviving son. Michael Brody (Lance Guest) and his friend Jake (Mario Van Peebles) are marine biologists there to help, but in the end it is up to Ellen and her new beach-bum love -- played by Michael Caine -- to put a halt to the fishy horror. Director Joseph Sargent concludes the series with an ending chosen from several alternate possibilities.