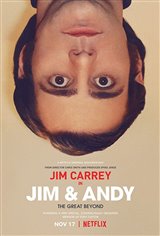 Director Chris Smith takes a look at Carrey's time spent portraying the troubled and complicated comedian/performance artist. Carrey earned critical acclaim and a Golden Globe for the performance, but many of the production’s most Kaufmanesque moments played out behind the scenes.

In Jim & Andy, Carrey reflects on how he and Kaufman rose to fame in oddly parallel universes, his experience channelling Andy and Tony Clifton, one of the complex characters Andy played, and more broadly the spiritual journey of his career.

Jim Carrey was born and raised in Newmarket, Ontario.