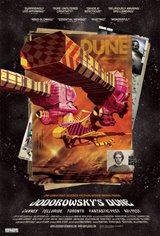 The story of cult film director Alejandro Jodorowsky from his childhood in Chili, where he was born to Jewish-Ukrainian parents, through his efforts as a provocative performance artist, to his decision to adapt Frank Herbert’s science fiction novel Dune.

Despite getting bands such as Pink Floyd, Magma and Peter Gabriel interested in providing the music and assembling a crack team of artists (who would go on to become some of the biggest names in sci-fi Hollywood history) he was rejected by every major Hollywood studio.