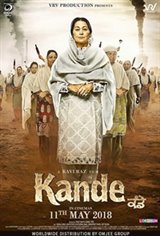 Kande is a Punjabi film based on the play written by Baaz Sukhpal. The film is based on friendship and relationships with a touch of romance too. 'Kande' which depicts the most adored game of Punjab, Kabaddi is about Meher & Baaz, who are the star players, but Baaz is very frustrated about losing the game every time to Meher.

He recites such an incident to his father (Yograj Singh) and they both decide to kill Meher slowly & steadily by giving him drugs. To complicate matters, Baaz's father is still holding onto a 24 old grudge against the father of Meher.