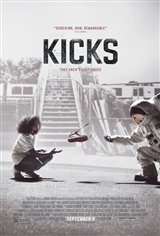 Brandon's (Jahking Guillory) dream is to own a pair of new Air Jordans. Living in the rough Bay Area community of Richmond, he has a number of problems: he's short, skinny, broke, nervous around girls, and has feminine features that are bound to make him a target. However, for Brandon, all his insecurities are projected to his worn, nearly disintegrating sneakers.

After he finally manages to get his hands on a pair of Air Jordans, he enjoys them only for a day before menacing neighborhood tough guy Flaco jumps him and steals the shoes. Flaco's gang even uploads the humiliating ordeal to YouTube. This leads Brandon and his two friends, Rico (Christopher Meyer) and Albert (Christopher Jordan Wallace), to go on a dangerous mission through Oakland to retrieve them.