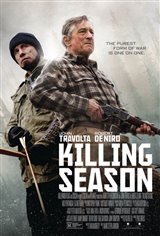 Benjamin Ford (Robert De Niro), a reclusive American military veteran, retreats to his cabin in the woods of the Appalachian Mountains, where he encounters Emil Kovac, a European tourist (John Travolta). The two come from different backgrounds, but strike up a friendship.

However, Kovac is not what he appears to be. The foreign visitor is secretly a former Serbian who is seeking revenge. What follows is a tense battle across some of America’s most forbidding landscape proving the old adage: the purest form of war is one-on-one.