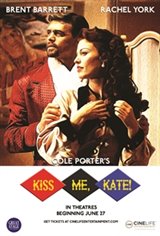 Kiss Me, Kate! is one of the most sparkling musicals of the golden age of Broadway. With Cole Porter's music and Sam and Bella Spewack's hilarious book - a take on Shakespeare's Taming of the Shrew in a 1940s theatrical context it was a hit from the outset.

When Michael Blakemore recently staged the first Broadway revival in fifty years, with choreography by Kathleen Marshall, his glorious production enchanted both critics and audience. It swept the board at the Tony Awards! This high definition recording was made when the show transferred to London and again attracted rave reviews and packed houses.

Rachel York and Brent Barrett are the stars of the show.