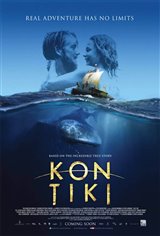 In 1947, explorer and ethnographer Thor Heyerdahl gathered an inexperienced crew to embark on a voyage across the Pacific on a wooden raft. His goal was to try and prove his theory that Polynesia was populated by South American settlers and not people from Asia, as the scientific community had presumed. Despite Heyerdahl's unrelenting determination, the journey didn't come without its fair share of struggles, such as no funding and the fact that he himself couldn't even swim.

Covering an astonishing 4,300 miles and crossing of the Pacific Ocean, Heryerdahl redefined the notion of fearless exploration.