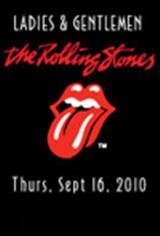 Rolling Stones fans across the country will get ultimate satisfaction for one night as this legendary multi-platinum band takes fans back to the summer tour that skyrocketed their careers with LADES & GENTLEMEN... THE ROLLING STONES. This historic big screen event features classic Stones performances from the 1972 tour and a special, theatre-only segment from Mick Jagger. Together with Jagger, Stones greats Keith Richards, Mick Taylor, Bill Wyman and Charlie Watts take fans inside life on the road during that magical summer when they rocked millions of fans in sold-out venues around the world. For the first time in over 30 years, legendary concert footage from the tour will be unveiled by the band for their fans in select Cineplex theatres across Canada on Thursday, September 16 at 7:00 p.m. local time.

Presented by Cineplex Entertainment's Front Row Centre Events and Eagle Rock Entertainment, this one-night-only event will feature the Stones in a career defining concert, testing the very limits of their own musical power. The footage was captured at four shows in Fort Worth and Houston, Texas on their 1972 North American tour promoting the "Exile on Main Street" album. The music played on that spectacular tour included what would later be known as some of the band's greatest all-time hits such as "Tumbling Dice," "Brown Sugar," "You Can't Always Get What You Want" and "Jumpin' Jack Flash."

"It's a full-on performance and energy levels are really high... everyone's very together and on," said Jagger.

Richards agreed with Jagger and recalled, "I knew that 'Tumbling Dice' was a killer live."

LADES & GENTLEMEN... THE ROLLING STONES was originally filmed in 1972 in 16mm by Bob Freeze and Steve Gebhardt of John Lennon's Butterfly Films and has been restored and re-mastered from vintage footage. Movie theatre audiences will get a one-time opportunity to flashback and be next to the stage during these historic concerts.