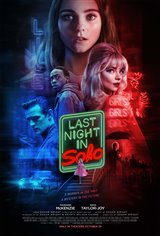 Aspiring fashion designer Eloise (Thomasin McKenzie) has moved to London for school. Excited at the prospects that await her, she wistfully wishes she could have lived there in the 1960s. Eloise gets her wish as she is mysteriously transported to that era, but discovers she's in the body of an entirely different person — a woman named Sandy (Anya Taylor-Joy).

Eloise soon discovers that she can travel back to the past every time she falls asleep. She learns more about Sandy's life and witnesses her being murdered by Jack (Matt Smith). With her continued visions, Eloise takes it upon herself to stop Jack both now (Terrence Stamp) and in the past, and in the process hopefully save Sandy.