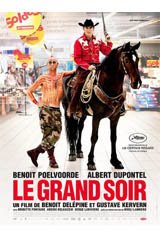 Not (Benoit Poelvoorde), who proclaims himself the "oldest punk in Europe," spends his days wandering through suburban parking lots and insulting people. One day his straight-laced brother Jean-Pierre (Albert Dupontel) snaps when he’s let go from his job as a mattress salesman. Jean-Pierre walks into a nearby Wal-Mart where he douses himself with gasoline and lights a match, but unfortunately, he’s ignored. Not takes him under his wing, renaming him Dead. Together, Not and Dead take a stand against private property, waking commuters from their torpor.