Leap of Faith: William Friedkin on The Exorcist 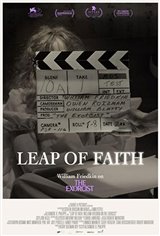 Since 1973, when the horror film The Exorcist was released in theaters and went on to become an instant success at the box office, then went on to win two Oscars, the cult classic has been interpreted and reinterpreted. In this documentary, the film's director William Friedkin takes us through the process that helped him create a story about the mystery of fate in The Exorcist.

We also learn more about Friedkin's creative influences, from his theory of the Rosebud moment in Citizen Kane, to the intricacies of adapting William Blatty's novel, as he tells the behind-the-scenes story of creating his biggest achievement.