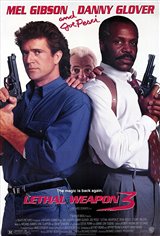 5 votes and 0 Reviews
Superstars Mel Gibson and Danny Glover return with director Richard Donner for Lethal Weapon 3, the third in the phenomenally successful action series. In this film, Roger Murtaugh (Danny Glover) is only eight days away from retirement and his partner Martin Riggs (Mel Gibson) once again manages to get them both into hot water with the both LAPD and the bad guys, who this time are Jack Travis (Stuart Wilson) and a gang of hoodlums selling armor-piercing bullets.

Joe Pesci returns as the fast-talking schmuck Leo Getz. A new addition to the cast is Rene Russo as Lorna Cole, a sergeant from internal affairs sent to investigate Riggs and Murtaugh, but who ultimately ends up falling in love with the caffeinated Riggs.