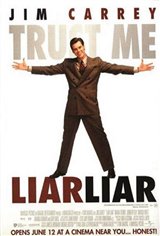 Comedian Jim Carrey stars in this hilarious film about a compulsive lawyer who’s forced to tell the truth for 24 hours as a result of his son’s birthday wish. Fletcher Reede (Jim Carrey) is a divorced lawyer who just can’t stop lying. Fletcher’s truth-twisting has built him a solid reputation as a lawyer, but his most valuable relationships are about to be tested when his young son’s birthday wish comes true.

Unable to speak anything but the truth, Fletcher is forced to battle through a career-boosting case without his lying habit to help him. Even though the wish was an “inconvenience” at first, it soon proves to be a life-changer for Fletcher.