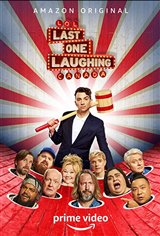 Jay Baruchel hosts the Canadian version of the international hit comedy series LOL: Last One Laughing. The six-episode competition series pits 10 of the best Canadian comedians against each other in a showdown, where they're not allowed to laugh at anything the other comedians say or do, or even laugh at their own jokes. One by one they're eliminated and join Jay to watch the rest of the competition. Special guests are brought in to see if they can crack up the comedians.

Filmed in Canada. Host Jay Baruchel and all the comedians are Canadian.