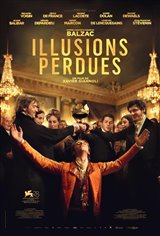 Paris, during the Restoration. Rejected by his mistress who is under pressure from an influential Marquise, Lucien de Rubempré (Benjamin Voisin), a provincial poet who has never been published, licks his wounds in a restaurant that welcomes destitute artists. There he meets Étienne Lousteau (Vincent Lacoste), a cynical journalist who takes him under his wing.

Thanks to his caustic pen, Lucien soon becomes a formidable culture critic, which gives him the opportunity to seduce Coralie, a rising star of the boulevard theater. With his success going to his head, Lucien undertakes to have her appear in a play by Racine on a more respectable stage. And in exchange for a favorable review of the novel by a protégé of an influential publisher, Lucien’s first collection of poems is finally published. But by compromising with the royalist press, Lucien finds himself doomed to failure.