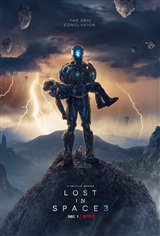 This 10-episode sci-fi series is a reboot of the popular 1960s TV series of the same name.

Set 30 years in the future, a geological-altering event on Earth has forced humanity to search for new planets, where they can form colonies. While on the way to a new planet where they can make a new life for themselves, the Robinson family's ship The Jupiter 2 is separated from the mothership and forced to crash land on a strange planet where they encounter many dangers.

John and Maureen Robinson (Toby Stephens, Molly Parker) and their children — Judy (Taylor Russell), Penny (Mina Sundwall), and Will (Max Jenkins) quickly realize they have to bond like never before in an effort to survive.

Filmed in British Columbia. Several of the cast members are Canadian.